Celebrating the music of the 1960s and '70s, cult indie icon Morrissey has released a brand new covers album, California Son, and he'll be performing from the new record at Meadow Brook Amphitheatre on Friday 13th September 2019! This show will be treat for any fan who longs to hear the influences that have shaped one of alternative music's most singular voices! Joining the former Smiths singer in support is Interpol! 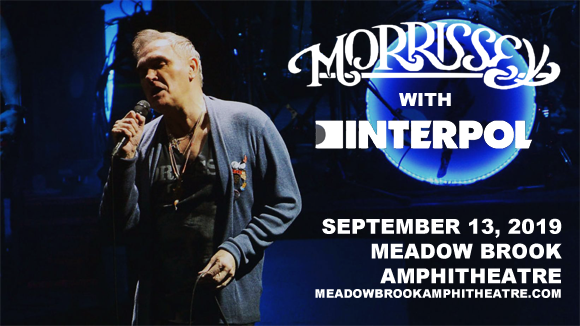 From 1982 – 1987, English singer, songwriter, and author Morrissey was the frontman and principal lyricist of British indie rock band the Smiths, whose musical voice, despite being short-lived, developed a cult following and has influenced no end of subsequent bands and artists. A year after the group disbanded, he embarked on a solo career with the release of his critically acclaimed debut album Viva Hate. Since his debut, Morrissey has released a total of eleven solo studio albums (with a twelfth due this year), as well as an autobiography and a novel, and his appeal and influence have continued to grow. In a 2006 poll for the BBC's The Culture Show, Morrissey was voted the second-greatest living British cultural icon.