A true legend of our time, blues rock guitarist Buddy Guy embarks on a joint tour with fellow Louisiana axe man Kenny Wayne Shepherd (or, more specifically, the Kenny Wayne Shepherd Band) this summer, bringing a dream co-headlining show to Meadow Brook Amphitheatre on Thursday 13th June 2019 – a must for any blues enthusiast! Expect soul-stirring performances from these masters of their craft! This is blues at its finest! 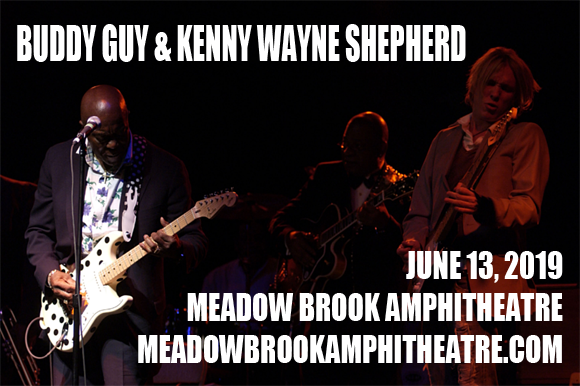 Widely considered as one of the world's best and most influential blues guitarists, Buddy Guy began his career in the 1950s upon moving from Baton Rouge, Louisiana to Chicago, Illinois, where he began working as a house guitarist at Chess Records, performing with Muddy Waters. Guy soon struck up a friendship with harmonica player Junior Wells, performing with him throughout the 1960s, and went on to release a string of hit albums throughout the '60s, '70s and '80s. Around this time, he began to develop a cult following, and was regularly endorsed by a variety of rock and roll artists, including Jimi Hendrix, Eric Clapton (Clapton has described him as "the best guitar player alive"), Jimmy Page, Keith Richards, Jeff Beck, John Mayer and Stevie Ray Vaughan. In the 1990s, Guy enjoyed another surge of popularity, releasing three Grammy Award-winning albums: Damn Right, I've Got the Blues (1991), Feels Like Rain (1993) and Slippin' In (1994). A highly-awarded artist, Guy has received many accolades throughout his career, including 23 W.C. Handy Awards, Billboard magazine's Century Award (he was its second recipient) for distinguished artistic achievement, the title of Greatest Living Electric Blues Guitarist, and seven Grammy Awards. Guy was presented with the National Medal of Arts in 2003, which is awarded by the President of the United States to "those who have made extraordinary contributions to the creation, growth and support of the arts in the United States," and in 2005 he was inducted into the Rock and Roll Hall of Fame by Eric Clapton and B.B. King. He is also an inductee of the  Louisiana Music Hall of Fame and the Musicians Hall of Fame and Museum, and in 2012 he was awarded the Kennedy Center Honors.