Grammy Award-winning blues rock supergroup Tedeschi Trucks Band are coming to Meadow Brook Amphitheatre on Tuesday 23rd July 2019 to blow you away with their hot new album, Signs! The band will be performing as part of their annual Wheels of Soul Tour, so not only will you get an awesome set of brand new material from the husband and wife led band, but also support sets from Blackberry Smoke and Shovels & Rope! 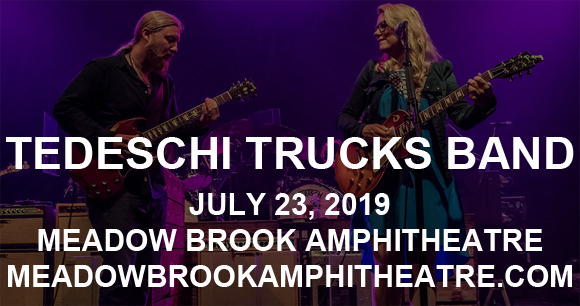 The Tedeschi Trucks band is a blues rock group that came to life in 2010 in Jacksonville, Florida, with the amalgamation of The Derek Trucks Band and the Susan Tedeschi Band, led by former Allman Brothers Band Derek Trucks and blues artist Susan Tedeschi respectively. The couple, who are husband and wife, toured together in 2007, teaming up with their respective groups and several other musicians in what became Derek Trucks & Susan Tedeschi's Soul Stew Revival. The tour was a roaring success and allowed the pair to spend more time together, so in 2010, they merged their two bands to form The Tedeschi Trucks Band. Their debut studio album, Revelator, was released in 2011 and won the 2012 Grammy Award for Best Blues Album.The band has released four studio and two live albums to date, their most recent being Signs, which was released in February 2019.