Veteran rock icon Roger Daltrey comes to Meadow Brook Amphitheatre on Thursday 5th July 2018 to perform songs from the legendary rock opera by The Who: Tommy!

“I'm really looking forward to singing Tommy, not only with my great backing group, but also some of the finest orchestras in the country," Daltrey said in a statement. "Pete Townshend’s rock music is particularly suited to being embellished by the sounds that an orchestra can add to the band. With the arrangements written by David Campbell, it should make a memorable night of entertainment for all those who love the arts.” 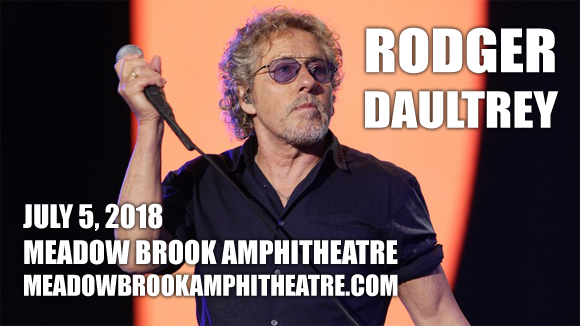 English singer, musician, and actor Roger Daltrey first came to public attention in the mid-1960s as the founder and lead singer of the rock band the Who – a band widely considered to be one of the most influential groups of the 20th century, selling over 100 million records worldwide. The band had a string of UK Top Ten singles throughout the 1960s, '70s and '80s, including "I Can't Explain", "My Generation", "Substitute", "I'm a Boy", "Happy Jack", "Pictures of Lily", "Pinball Wizard", "Won't Get Fooled Again", and "You Better You Bet". Whilst still a member of The Who, Daltrey embarked on a solo career in 1973 and since then has released eight studio albums, five compilation albums, and one live album as a solo artist. Daltrey has received two Lifetime Achievement Awards as a member of The Who: from the British Phonographic Industry in 1988, and from the Grammy Foundation in 2001. He was inducted into the Rock and Roll Hall of Fame in 1990 and the UK Music Hall of Fame in 2005.