Aussie pop rock sensations 5 Seconds of Summer will be bringing the party to Meadow Brook Amphitheatre on Tuesday 11th September 2018! The group are performing as part of their Meet You There Tour, promoting their hot new album of the same name, and it sounds like they'll be pulling out all the stops:

“Growing up is what we had to do on Youngblood. Seven years as a band may seem like a long time, but we were teenagers when we started. We had to look at each other and say, ‘Are we going to stop now, or do this forever? Because if we continue, then we have to go farther than we ever have before.’” 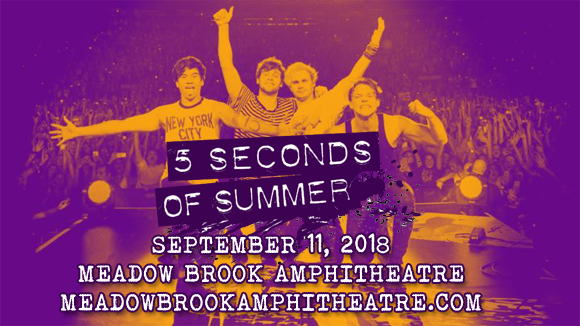 Australian pop rock band 5 Seconds of Summer rose to fame in 2011 through their YouTube channel, where they uploaded covers and original songs. In 2013, the band gained international recognition when British boy band One Direction invited them to open on their 2013 Take Me Home Tour. The group's debut single, “She's So Perfect”, was released the following year, and topped the charts in Australia, New Zealand, Ireland and the United Kingdom. Later that year, the band released their self-titled debut album, which reached number one in eleven countries. Youngblood, 5 Seconds of Summer's third studio album, will be released in 2018.